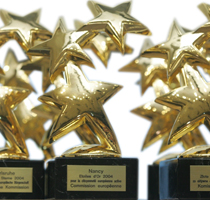 And the laureates for the best town twinning schemes are”¦

The European Commission, in partnership with the Council of European Municipalities and Regions (CEMR), has awarded the "2006 Golden Stars" for excellence in European Citizenship to six town twinning schemes, on 27-28 September 2006 in Brussels.
The six town twinning schemes' winners are:
. Leeds City Council (UK) - Brno (CZ)
Fostering educational partnerships between old and new EU member states

. Them (DK) - Gulbene (LV)
The Latvian Danish week of friendship

. Siedlce (PL) - Pescantina (IT), Sabinov (SK), Vilnius (LT)
One Europe, one family, together at last

. Ontinyent (ES) - Mark (SE)
A new twinning bridging the north and the south of Europe

. Zierenberg (DE) - Gattatico (IT)
Yes to sport - no to drugs, violence and racism

. Nancy (FR) - Karlsruhe (DE), Lublin (PL)
Prejudices and realities - a multiannual theatre programme of young Europeans
The Golden Stars were awarded in the framework of the Forum "Europe for the Citizens" which brought together representatives from European towns, the European Commission as well as CEMR representatives.
Town twinning: the central pillar of active European citizenship
The award ceremony also gave the opportunity for mayors and other representatives to discuss the future of town twinning as well as the problem of European citizens' civic participation at the European level.
The chair of CEMR's working group on twinning, Anders Knape, in a message to the conference, recalled that town twinning saw its first real impetus in the wake of World War II, with a second impetus after the fall of the Berlin Wall. The essence of town twinning is people meeting people from other countries. It must keep being so. Twinning is a bottom-up movement rather than a top-down one. Besides, because twinning means putting forward individuals, it means that small is fundamental and that red-tape must be kept to a minimum. Last but not least, town twinning must be seen as relevant to citizens and to local media.
CEMR secretary general, Jeremy Smith, expressed CEMR's support to the change of the name of the programme: originally it was called "Citizens for Europe"; however, its new name, "Europe for citizens", reflects better its role and mission. He reiterated CEMR's commitment to work alongside the European Commission and the Executive Agency of the Commission's DG Education and Culture (in charge of the "Europe for citizens" programme).
Jeremy Smith also stressed the fact that though town twinning is the central pillar of the active European citizenship, CEMR also contributes to the development of European citizenship through its activities in favour of women and men equality in Europe as well as via the promotion of the local dimension of North South cooperation and the UN's Millennium Objectives.
He concluded by welcoming the fact the programme is not accessible only to the EU's 25 Member States, but also to member states of the European Free Trade Agreement (EFTA) as well as the Western Balkans.
Photographs of the Golden Stars 2006 ceremony
CEMR's activities in the field of town twinning and European Active Citizenship
The EU Commission's website on town twinning