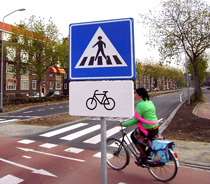 Is your city interested in taking part in the European mobility week campaign? Would you like to learn more about how it works? Participate in the workshop on the '2007 European Mobility Week", at the Committee of the Regions, in Brussels, on 7-8 February 2007.
The event will feature a series of workshops prepared by cities involved in the 2006 European mobility week campaign. The city of Bologna (Italy) will demonstrate the benefits of green technologies for better urban mobility. Lublin (Poland) will explain how it has progressed towards an environmentally friendly city. Leon (Spain) will present how it has improved the image of public transport and bicycles in the city. The top three cities committed to the pursuit of sustainable urban transport will also receive the mobility week award.
Speakers will include Environment Commissioner Stavros DIMAS; Vice-president of the Commission for Territorial Cohesion of the Committee of the Regions, Bernard Soulage; as well as representatives from European cities.
Background information
The European mobility week (EMW) is an awareness-raising campaign which promotes sustainable transport by encouraging cycling, walking, public transport and car-pooling. One of the main criteria to participate in the EMW is to launch at least one permanent measure which will continue to exist after the week is over. Examples of permanent measures introduced by participating cities and regions include new cycle routes, online car-pooling systems and the elaboration of school travel plans. In 2006 more than 1300 cities from 38 countries were involved in the EMW campaign actively contributing to combating climate change and promoting sustainable modes of transport.
The programme and registration form (deadline: 19 January)
Working language: English
Venue: