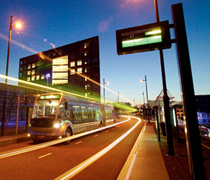 Traffic congestion, road accidents, transport costs, double parking and pollution: these are some the urban problems discussed during the NICHES seminar in Brussels, on 12 December 2006.
NICHES seminar (New and Innovative Concepts for Helping European transport Sustainability) aimed at seeing how European cities tackle problems linked to urban transport and directly affecting citizens' lives. Speakers at the seminar included local elected representatives, transport experts, as well as representatives from the European Commission and of the Committee of the Regions.
In Europe, 80% of freight deliveries take place in urban areas. They also involve 20% of the total traffic and 50% of the environmental effects. To face these problems, the city of Barcelona has put into place a new system of freight delivery. Ferran Julián, councillor of mobility city of Barcelona, explained that multi-use lanes have been widely introduced in the city. Different users (commercial freight, public or private transport) are allocated exclusively use for specific time periods over the day. The city has also developed zones of controlled access (i.e. in the historic centre), new systems of quiet night deliveries as well as "clean" delivery vehicles. Among the major achievements are the reduction of the time spent in travel, the amount of illegal parking and of the traffic congestion.
To tackle transport problems, some cities have focused their efforts on new technologies. In 2004 a new type of bus was introduced in the Dutch city of Eindhoven: Phileas. Henk Kok, representing the city, declared that this new system of public transport, half way between a bus and a tramway, is environmentally "clean". It provides cities who cannot afford train infrastructures to develop transport networks close to those of trains and of tramways.
The city of Lyon has implemented a rent-a-bike scheme, the Vélo'V. The Vice president of Great Lyon, Gilles Vesco, explained that citizens of the city are provided with the possibility to rent bikes for a determined period and to leave them afterwards in one of the 250 renting spots in the city. Vélo'V is financially covered by advertisements and even provides the city with some benefits. Thanks to this system the amount of carbon dioxide emission has been reduced by 3,000 tons. Jean-Luc Moudenc, the mayor of Toulouse (France), has decided to implement the same scheme in his city in 2007.
Background information
NICHES seminar was organised by POLIS (the network of municipalities for innovative and sustainable transport), together with the Council of European Municipalities and Regions (CEMR), the Committee of the Regions, Rupprecht Consult, PTV, Eurocities, the city of Stockholm and Warsaw University of Technology.
NICHES is a EU funded project. It aims at stimulating a wide debate on innovative urban transport and mobility, and to promote the most promising new concepts, initiatives and projects. It was launched in November 2004 for a two year period, after which the final results and materials will be presented and discussed in a final conference, in Toulouse, on 16 March 2007.
Presentations of the schemes implemented in Barcelona, Eindhoven and Lyon
Presentation of NICHES
CEMR's activities in the field of transport