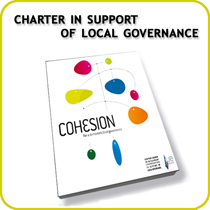 The European Development Days, which took place in Strasbourg (France) from 15-17 November 2008, dedicated the launch of a Charter between players in European cooperation to boost local governance and improve the effectiveness of assistance at local level.
Representatives from the main families of European players who contributed to the development of the European Charter on development cooperation in support of local governance were present.
Faced with the increase in the number of actors involved in cooperation at local level, this Charter hopes to find more coherent methods of action, which are complementary to other international initiatives which already exist. This Charter defines the principles and methods for a more effective cooperation at local level and identifies the priority areas for intervention on aid effectiveness.
The Charter is open to all European actors who support its principles. It aims to become a dynamic document nourished through the analysis of past experiences. To become involved together in the Charter, stated Charles Josselin, President of United Cities France (Cités Unies France) is to help to give effective answers together to the needs of local development. Support from everyone in this process is essential.
Olivier Consolo, Director of the European NGO Confederation for Relief and Development (CONCORD) welcomed this process which makes it possible to take to the field and acts as a mouthpiece for working in concrete terms, in both a multi-lateral and multi-actor way.

Wolfgang Schuster, Vice President of the Council of European Municipalities and Regions (CEMR) called for heightening the awareness of the citizens to the need for a more effective cooperation between the North and South. To make this Charter a reality, it is important to disseminate the principles stated within it as widely as possible.

We are on the right track! said Xavier Gizard, Secretary General of the Conference of Peripheral Maritime Regions (CPMR) and the Forum of Global Associations of Regions (FOGAR). To make development aid more effective, coordination from all levels is necessary from international bodies down to cities, via the Regions. Today we have taken a step forward in maintaining that the territorial dimension can be
considered as a key to development.
This initiative was also welcomed by several non-European actors including the Interior Minister of Morocco, Chakib Ben Moussa and Simon Compaore, Mayor of Ouagadougou and President of the Association of Mayors of Burkina Faso, both honorary patrons during this ceremony.
Coming under the framework of the French presidency of the European Union, this process has, since 2008, been led by the French Ministry of Foreign and European Affairs and United Cities France, in collaboration with the European Commission.
Let us build a common world in partnership concluded Luc Van Den Brande, President of the Committee of the Regions.