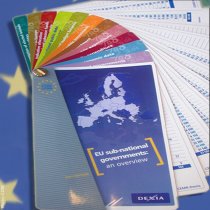 DEXIA group and the Council of European Municipalities and Regions (CEMR) have published the second edition of their joint study on the state of local and regional authorities in Europe. This set of 12 factsheets includes the key figures on European local and regional government.
The 2007 edition features detailed key data on the internal organisation of European countries, public sector financial aspects (expenditures, public investments, public debt), structural and cohesion funds, town twining, or the representation of elected women in municipalities.
The study reveals that sub-national public expenditures represent some 16% of the European GDP, and their investments 2/3 of all public investments. It also shows that 40% of all European local governments are French, that Germany holds the largest number of twinned towns; and that Latvia has the largest percentage of women mayors (35%).
These fact-sheets are a very handy and useful tool for those interested in learning about local government, said Jeremy Smith, CEMR's secretary general. At a glance, it is possible to compare the situation of European sub-national governments within all EU member states.
Bruno Deletré, Director General "Public Finance" and member of the DEXIA's executive board, welcomed the fruiteful partnership between DEXIA and CEMR. CEMR is a very dynamic European association which, thanks to its national associations, is directly connected to the majority of local and regional governments in Europe. He added that both partners are setting up new areas of cooperation. Our goal is to promote together knowledge of European sub-national governments. This will contribute to the shaping of a Europe based on local and regional democracy.
Dexia also published its "2007 Economic Outlook" on sub-national public finance in the European Union. It brings an overview of the institutional and financial situation of the sub-national public sector in the 27 Member States of the European Union, from 2000 to 2006. For the first time, it includes the two new EU Member States of Bulgaria and Romania.
Translate