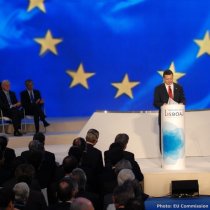 Local and regional government welcome signature of the Treaty of Lisbon

The Council of European Municipalities and Regions (CEMR) welcomes the Treaty of Lisbon, formally signed by the Heads of State and Government of the European Union, on 13 December 2007.
CEMR's President, Mayor and Governor of Vienna, Michael Häupl today said that 'the new treaty not only helps to improve the EU's decision-making processes. It also strengthens the role of local and regional government within the EU. Until now, we have been the hidden partners in the shaping of Europe. We are therefore very pleased that the principle of local and regional self-government is at last recognized in the treaties. It is time for Europe to concentrate on the big issues that face our citizens, and we are committed to play a full and positive role".
On 4 and 5 December, CEMR's Policy Committee adopted a declaration on the Treaty of Lisbon. In it, CEMR welcomes the treaty and argues that the stronger consideration of the local and regional dimension in the Treaty is not a symbolic reference, but has real meaning and legal consequences, including on issues regarding the role and management of our public services.