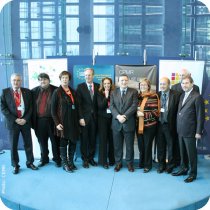 The current situation in Europe, characterised by economic and social instability as well as a lack of confidence vis-à-vis national and European governing bodies, has led local and.regional governments and their leaders to call for their active involvement in all EU policies with a territorial dimension via the “governance in partnership” approach.

This approach was presented at the occasion of an event organised on 12 December 2011, in Brussels, by the four major European networks of local and regional authorities.

Without the full participation of local and regional authorities, the Europe 2020 strategy objectives of smart, sustainable and inclusive growth cannot be achieved. This new model of European governance must also involve citizens, businesses, civil society and any other relevant stakeholders in order to reach these common goals.

“Europe needs a new model of multi-level governance based on a true partnership between all spheres of government. Thanks to the Lisbon Treaty, we now have the political legitimacy to advocate this partnership. We must work together through horizontal and vertical networks to ensure tangible results and the integrated place-based development of Europe. Only thus will we avoid the failure of the Europe 2020 strategy, as was the case with its predecessor, the Lisbon strategy, which did not adequately engage local and regional authorities.” - Wolfgang Schuster, Mayor of Stuttgart and President of the Council of European Municipalities and Regions

“We welcome the European Commission's proposal for a common strategic framework for the different European funds, as it will help translate the objectives of the Europe 2020 strategy into investment priorities and will be complemented by partnership agreements, to be developed at the national level. In order to clarify the responsibilities of the different levels of governance, we believe that the Commission's 'code of conduct', expected early next year, should highlight the establishment of a territorial pact at the national level, which should bring together all actors on the ground. Indeed, it is imperative to associate all of these regions if we are to ensure the successful economic growth of Europe.” - Jean-Yves Le Drian, President of Brittany Region and President of the Conference of Peripheral Maritime Regions (CPMR)

“Cohesion policy is the ‘visible hand' of European integration. It cannot be reduced to financial trade-offs, as it is the best answer that European territories can bring to the crisis, national self-interests and temptations of isolationism. In this context, applying strict conditions for structural fund distribution can obviously not be done at any price. It is legitimate to strive for more efficiency but regions cannot be asked to pay for states' excessive debt problems!” - Michèle Sabban, Vice-President of Ile-de-France Region and President of the Assembly of European Regions (AER)

Welcoming the European Commission's draft structural funds regulations as a strong starting point for the forthcoming negotiations, Frank Jensen, Lord Mayor of Copenhagen and President of EUROCITIES, said: “It is metropolitan Europe that will lead the way to greater global competitiveness. We are keen to see Commissioner Hahn's desire for an ambitious urban agenda move from paper into practice. And the regulations provide clear opportunities for that to happen. The strong required focus on cities and metropolitan areas could be better assured if key city leaders were involved in programming EU funds, at present largely managed by regions. This is the only way to ensure that EU investment is integrated with other actions and therefore has the greatest impact.”