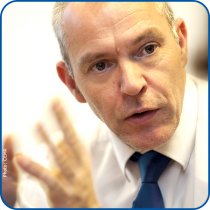 CEMR secretary general: “Much remains to be done to make EU policies tuned to local and regional realities”

The Council of European Municipalities and Regions has launched its local and regional governments’ manifesto. CEMR secretary general, Frédéric Vallier, explains the reasoning behind this manifesto.

Why have local and regional governments issued a manifesto?

70% of the EU legislation sooner or later ends on a mayor’s or a president of region’s desk. With the European Parliamentary elections just around the corner, it is the appropriate time to remind European institutions that the decisions they are taking need to be backed up by local and regional authorities. This is why we have come up with a manifesto that constitutes a significant source of ideas for bringing EU policies closer to local and regional realities. For us, the content of this 20-page document does not expire with the European elections, it’s meant to be a good heading out to EU politicians and policy makers for them to read and reflect upon.

Do you think MEPs will be receptive?

I must say, we have been pleased with the feedback that the manifesto has received so far. We also know that half of the current MEPs are experienced in local and regional politics and I am confident that these will be attentive to our concerns. Let's hope that the other half will follow suit. Nevertheless, much remains to be done to make EU policies tuned to local and regional realities. And that is the reasoning behind this manifesto.

How can you reach a common position when your members come from so many different countries with different problems and realities?

It is actually easier than you think. After all, one of CEMR’s main focus is to make sure that EU legislation is adapted to the needs and concerns of Europe’s municipalities and regions; and there more grounds of common interest than points of disagreements. Whether you work for a small municipality in Scandinavia, a city in Poland, a province in the Netherlands, a region in France, a Metropolitan city in Italy, a medium size city in Germany or Portugal… you want EU legislation to give you the means to ensure a good development of your territory, especially in this time of crisis, in a way that benefits the needs of your citizens. All our members will always agree on this.

Where can we find the manifesto?

The manifesto is yet available in English, French, Czech, German, Italian, Polish, Portuguese, Romanian and Spanish. In addition to this, and in order to push the manifesto’s content online and on social media, we have produced a video which includes clips with messages from elected representatives of our member associations. Finally, I invite those interested to join us in a debate we have just launched through our twitter account (@ccre-cemr) and dedicated hashtag #myEUvoice.

(Re-)discover our campaign and 9 propositions