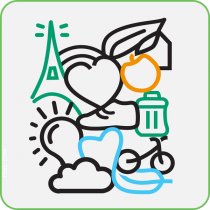 Only a few days left before the opening of the Paris climate conference (COP21). Now is the time to recall that cities contribute to 75% of the world's carbon dioxide emissions, and that they will grow by 1.4 billion people in the next 20 years. With these challenges in mind, cities and local governments will play a critical role in the upcoming climate negotiations.

Therefore, on 4 December, in the margins of the COP21 negotiations, 1,000 mayors from all over the world will gather for the Climate Summit for Local Leaders. Their aim: to showcase their initiatives and solutions to reach a universal climate change agreement. Co-chaired by Anne Hidalgo, the mayor of Paris and Michael R. Bloomberg, former mayor of New York, the summit will help ensure that the voice of local representatives is heard, that central governmentssee them as partners in the ecological transition.

Local and regional governments’ networks have been mobilised, among them C40, ICLEI, United Cities and Local Governments (UCLG), the Council of European Municipalities and Regions (CEMR) and PLATFORMA. PLATFORMA and the CEMR will organise on 5 of December from 9.30 am to 12.30 am a thematic conference “European cities and regions united against climate change”. Held in Paris city hall, the conference will aim at showcasing local and regional governments’ activities and best practices in climate-oriented decentralised cooperation.

Consult the programme and video presentation of the Climate Summit for Local Leaders.

For more information and to register, please contact Marine Gaudron at PLATFORMA.

Translate
See also: CEMR and its members associations' policy position on the international negotiations on climate