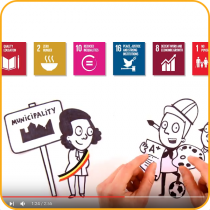 The Association of Flemish Cities and Municipalities (VVSG) started an awareness raising campaign regarding the localization of the Sustainable Development Goals (SDGs) in the Flemish local governments. In 2016 the VVSG published a declaration of municipal engagement for the SDGs that up to now has been signed by one fifth of the Flemish municipalities (this declaration is also available in Dutch, Spanish and French).

A local translation of the SDGs and their relevance for the Flemish local governments can be found in the publication “Local support for global challenges”. Last year, VVSG “glocalised” its monthly publication to the membership (called LOCAL) on the occasion of an international SDG conference organised under the title “Global Goals, Local Focus” (this publication is also available in Dutch, French and Spanish).

VVSG further localised the SDGs into 17 images recognisable for local governments in their local and international action (individual posters). VVSG also made a short introduction movie on the Flemish municipal translation of the SDGs (also available in French, Spanish and Dutch).

And since last month, it started with a 2-year lasting pilot program for 20 Flemish municipalities to experiment on how to include the SDGs in the next municipal planning cycle (2020-2025).