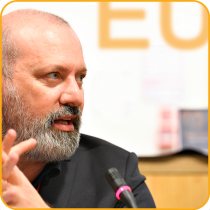 Stefano Bonaccini: 'In Africa and Europe, the future is local – ignoring it is a dramatic mistake'

“As African and European Heads of state and government have concluded their 5th African Union and European Union summit (AU-EU summit) in Abidjan, local and regional governments from both continents can be proud of a successful first Africa-Europe Local Government Forum. It is a shame that despite all the supportive messages received the AU-EU Summit failed to open the floor to local governments, civil society and youth,” writes the President of Emilia Romagna and CEMR, Stefano Bonaccini on a “Guest post” on BlogActiv.

“We, the towns and regions of Africa and Europe…”

Local leaders of both continents have delivered the Abidjan Declaration of Local & Regional Governments, calling upon the Heads of state and government to strengthen the content, modalities and objectives of the Africa-Europe partnership by taking on board society’s key stakeholders, and local and regional governments in specific.

The Africa-Europe forum of local and regional governments was the first of its kind. Local leaders pledged that it will not be the last. We demand that it be considered the starting point of true integration of subnational governments in the political dialogues and planning between the African Union and the European Union.

Both Unions have recognized the key role local and regional governments play in sustainable development. The African Union’s Agenda 2063 commits to renew leadership at both the national and the local levels. The ‘European Consensus on Development’ and ‘next steps for a sustainable future’ explicitly recognise the role of cities and regions and decentralisation processes in achieving a sustainable future.

The topics local and regional governments are tackling as priorities for sustainable development are not disconnected from what is on the AU-EU agenda. during the Summit, the heads of states discussed at length about migration but seemed to forget that cities in Africa and Europe are the ones on the frontlines to temporarily or permanently host migrants. Migrants leave their city of origin to settle or transit into another host city in Africa or Europe.

The Forum of local and regional governments welcomed a delegation of the AU-EU youth plug-in initiative. Involving youth in local public policies and keep attractive opportunities within the territories they live in are among the main challenges of local and regional governments in Europe and Africa. Empowering youth was also the overarching theme of the AU-EU Summit and despite being on the agenda, together with civil society and local governments, none of these representatives were heard by the heads of states and governments.

It is clearly a missed opportunity, a mistake even, that the Local Governments nor the civil society organisations got the chance to address their vision at the AUEU summit.