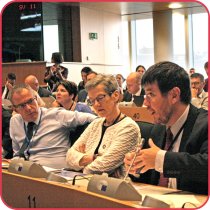 What kind of cohesion policy do towns and regions need for their future?

Through Cohesion policy, the EU invests millions in local and regional infrastructure and services. And with the EU’s next long-term budget coming up, the Commission has released a proposal to redefine cohesion policy for the 2021-2027 period.

The impact of the future cohesion policy on towns and regions, and their citizens, will be immense. On 4 September, a conference was held at the European Parliament to discuss the proposal with Commission representatives. It was organised by the URBAN Intergroup, presided by MEP Jan Olbrycht, in partnership with CEMR and EUROCITIES. As the voice of Europe’s towns and regions, CEMR was there to convey the needs and expertise coming from the ground. This is what we had to say.

Yes to simplification, no to cutting cohesion

As CEMR Secretary General Frédéric Vallier put it, “We heard how policies should be designed at European level, but what about Member States?"

There is indeed a risk that the Commission’s proposal could be misinterpreted by Member States. It could be read in favour of recentralisation. Given that it’s the exact opposite that towns, regions and the Commission would want, it seems fundamental to make the text crystal clear. The proposals should explicitly mention that the dialogue between local, regional and national governments must apply for all EU funded programmes under cohesion policy.

As MEP Matthijs van Miltenburg stated, “Cohesion policy is about delivering to citizens on the ground. But there is also the pressure of rural areas and the need to reinforce urban-rural linkages.” Rural areas face the haunting challenges of depopulation, the digital divide and are excluded from Europe’s main transport routes. These critical issues still need to be addressed, and show that rural development must remain a priority of the future Common Agricultural Policy.

If you think about it, at the end of the day, all EU funds have an impact at the local level. That’s why we are in favour of territorial mainstreaming: all funds should integrate a territorial aspect, rather than strictly separating territorial and non-territorial funds.

On the European Parliament’s side, the final decision should be made in April 2019. Before that, during the next few months, the Parliament’s Committees will be voting on the proposals, followed by a trilogue with the other institutions. We will keep you informed of new developments.

Read CEMR's 10 key messages for the future of cohesion policy.