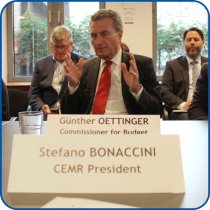 “For you and for me, cohesion is key” states Commissioner Oettinger

The European Union’s budget affects towns and regions on so many levels. In particular, via cohesion policy, through which millions are invested in local and regional infrastructure and services, all over the continent. Unfortunately, cohesion policy is at risk of being cut.

That is one of the main reasons why, on 25 September in Brussels, CEMR’s Executive Bureau met the man in charge of the EU budget: Commissioner Günther Oettinger.

The President of CEMR and of the region of Emilia Romagna, Stefano Bonaccini, expressed his concerns about the reduction of cohesion policy directly to the Commissioner: “Reducing the support for economic, social and territorial development of our cities, towns, villages and regions is a fatal sign.”

Commissioner Günther Oettinger, however, shared a reassuring message: “For you and for me, cohesion is key. It’s a success story. I don’t know if we need cohesion policy post 2050. But we do need it post 2020.” An optimistic sign for Europe’s towns and regions. The Commissioner also pointed out the importance of the simplification of cohesion policy, and added that “flexibility between programmes and between years is key.”

Towns and regions need a fair say in EU policymaking

Several of Europe’s great challenges, such as migration, climate change or mobility “find their expression at local level and so need to be addressed and solved in our communities”, later stated Mr Bonaccini. As these issues are inextricably linked to towns and regions, he added that: “the role of and specific contributions made by cities, towns and regions need to be recognised in the EU policy and decision-making process, and appropriate measures should be introduced to ensure that not only their voices are heard, but that their input has an impact.”

It seems the Commission has understood this to some extent, as in its final report, the Task Force on Subsidiarity and Proportionality acknowledged that the views of local and regional governments should be better taken into account.

The EU has strategic decisions to make. To sum up, the question is: does the EU want to invest in its towns and regions? For Europe’s unity, and for Europe’s strength, the answer should be yes.

You can find all the pictures of the event here.

CEMR’s Executive Bureau will review the specific proposals made by the Task Force on subsidiarity and proportionality, to make sure they work in the best interest of Europe’s towns and regions. It will then provide some initial responses.

Read CEMR's 10 key messages for the future of cohesion policy.