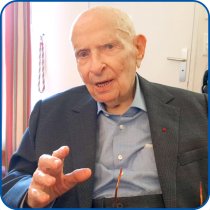 CEMR and its French Section AFCCRE are in mourning

Lucien Sergent, the last living founder of CEMR, former mayor of Etrechy and former President of the Standing Conference of Local and Regional Authorities of Europe, has passed away at the age of one hundred and one.

“It is with great sadness that we have been informed of the passing away of Lucien Sergent, whom I was able to meet on several occasions and the last time a year ago at the celebration of his centennial birthday. Born on 24 November 1918, Lucien Sergent was the last witness of the creation of the Council of European Municipalities and Regions. The family of local and regional governments will remember him as a strong leader of the municipal movement. Until the very end of his life, Mr Sergent remained committed to our organisation, to the defence of decentralisation and local democracy and to a united and peaceful Europe. The President and the board of CEMR join me to express our deepest sympathies to his family and to the French Section of CEMR.”

A key figure of the municipal movement, Lucien Sergent served as mayor of Etrechy, in the Department of Essonne in the Parisian region, from 1947 to 1977, as a member of CEMR’s Policy Committee and as the President of the Standing Conference of Local and Regional Authorities of Europe in the early 90’s (the predecessor to the Congress of Local and Regional Authorities of the Council of Europe).

A resister during the Second World War, Mr Sergent dedicated his life to peace, Franco-German reconciliation and the idea that only a united Europe, based on strong autonomous local governments, could save our continent from the conflicts of past centuries.

Here is the last interview he gave us, at the occasion of the publication of “Europe 2030”, providing his vision on the future of Europe based on his memories and actions.