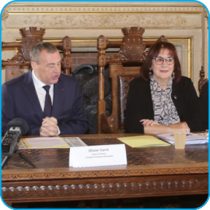 Conference on the Future of Europe: Šuica pledges to involve local governments

How should the EU address citizens’ concerns? How will local governments be involved in the Conference on the Future of Europe? How will the EU Commission manage the sheer volume and diversity of suggestions from citizens? These were some of the questions from members of CEMR’s Policy Committee to EU Commission Vice-President Dubravka Šuica.

The debate was held on the occasion of the first meeting of CEMR’s new Policy Committee for 2020-2022. The event was hosted by the city of Orleans as part of its international “urban diplomacy” and co-organised by CEMR and our French association, AFCCRE (see our online photo album).

The European Commission and Parliament have called for a Conference on the Future of Europe to involve citizens and all levels of government in reforming the European Union. With historically-high turnout of over 50% in the recent European parliamentary elections and numerous challenges to traditional politics, Šuica argued that “we are at a key moment in European history.”

Šuica pledged to closely involve local and regional governments in the conference. She insisted that European democracy included not only MEPs and national parliamentarians, but also “1 million local and regional elected representatives”, whose experience is sorely-needed in the debate on the future of Europe. “We need local and regional authorities on board”,  Šuica said.

Šuica stressed that the Conference would host “open, inclusive, transparent and structured debates”. All levels of government were also encouraged to organise their own citizen dialogues under the same banner.

Local and regional governments look forward to engaging with the Conference and expressing their concerns and viewpoints. In particular, CEMR will share local governments’ innovative practices of citizen engagement in order to help the Conference live up to expectations and deliver feasible outcomes.

The Conference on the Future of Europe will be opened on 9 May 2020 - 70 years after the historic Schuman Declaration which launched European integration and 75 years after the end of the Second World War - and is expected to last two years.