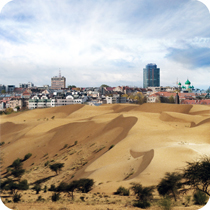 Climate change under the spotlight at EU Development Days

The European Development Days will be held in Stockholm, Sweden, on 22-24 October, 2009.
This year, special highlight will be given to the adaption to climate change, the promotion of energy efficiency, the global economic.recession and democracy.
The three-day event will bring together European, national and local political leaders, parliamentarians, NGOs, Nobel prizewinners, academics, celebrity campaigners and business and institutional representatives from 125 nations. Speakers will include José-Manuel Barroso, President of the European Commission; Gunilla Carlsson, Minister for Swedish International Development Cooperation; Louis Michel, European Commissioner for Development and Humanitarian Aid; and Fredrik Reinfeldt, Prime Minister of Sweden
Local government and development cooperation
The 2008 edition of the EDD had the issue of local governance and decentralised cooperation as its main theme. One of the highlight of the event was the launch of the platform of European Local and Regional Authorities for Development. It brings together European local and regional government and its associations to coordinate and strengthen their voice at European level on all development co-operation issues. It also helps to exchange information, promote mutual learning, and facilitate dialogue between them and other actors such as NGO's. The platform will hold a stand at the 2009 EDD in Stockholm.
Registration is open at the European Development Days website.
More information on local government and development cooperation is available on the worldwide twinning and partnership for development website.