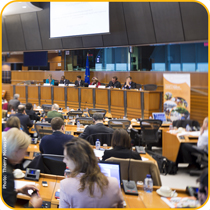 Summary of all sessions of PLATFORMA's annual forum

Over one hundred European and international decision-makers and local and regional elected representatives came together on 4 and 5 March 2013 in Brussels at the occasion of the annual forum of the European platform of local and regional authorities for development cooperation (PLATFORMA).

Moderated by the deputy mayor of Rennes (France) and member of the AFCCRE Executive Committee, Roselyne Lefrançois, the first session dealt with the current economic crisis, allowing participants to exchange on the situation in different countries in relation to decentralised development cooperation.

“Bonn brings its expertise to cities on four continents. In return, our cooperation policy allows us to benefit from a very positive image, to develop our international network and to learn from the experience of larger partner cities in China, for example,” said Christiane Overmans, councillor of the City of Bonn (Germany) and chair of the development cooperation committee of the CEMR German section (RGRE).

With a more optimistic outlook on the crisis, Fatallah Oualalou, mayor of Rabat, in Morocco, declared: “Local economy, cooperation in water and energy management—decentralised cooperation is an important tool in finding a way out of the crisis. In today’s changing world economy, we must ensure that this crisis becomes an opportunity for local and regional governments in Europe, in Africa and beyond. 2014 will be mark the end of the crisis. Let’s not miss out on this opportunity and reflect upon this transition together, at the occasion of the 4th United Cities and Local Governments (UCLG) World Congress on ‘Imagining society, building democracy’, to be held in Rabat from 1 to 4 October 2013.”

The second session revolved around existing development cooperation programmes and was moderated by the UCLG secretary general, Josep Roig.

Participants notably underlined that local and regional authorities cannot be considered as “simple beneficiaries and recipients of the programmes”. The role of municipalities and regions in the implementation of these programmes on the ground is now recognised by international institutional donors. However, their strategic opinion must be taken into consideration when elaborating these programmes, as "cities, municipalities and regions are a local solution” when it comes to development cooperation.

A presentation by the Covenant of Mayors also allowed participants to learn from this successful cooperation model between multilateral institutions and local authorities. This movement is, to this day, the most ambitious initiative that aims at encouraging citizens and local authorities to go beyond the EU’s climate and energy objectives.

Impetus for action of local and regional governments in fragile states

On the second day of the forum, a third session was organised in order to examine the role local and regional governments can play in fragile states, confronted with serious internal or external difficulties and disasters.

Participants notably highlighted the importance of local and regional authorities in reconstruction.  The vice-president of the Pays de la Loire Regional Council and municipal councillor of Nantes (France), Jean-Philippe Magnen noted that “while it is important for Europe to continue providing emergency response to countries in need, our main priority is to help with the process of reconstruction via the mobilisation of local and regional authorities.”

The challenges faced by fragile states were also discussed in the context of the current economic crisis. The first deputy mayor of Timbuktu (Mali), Aziza Mint Mohamed Kattra, underlined that “had decentralisation been fully implemented from the start, the crisis wouldn’t have been as badly felt as it is now. The existing degree of decentralisation did however help limit its consequences.” To this, the mayor of Luxembourg, Xavier Bettel, added that European countries must avoid the crisis-influenced tendency to save money at all costs, thus isolating themselves from the rest of the world. “We must keep in mind that some countries are worse off than we are and show proof of solidarity by helping our partner countries.”

Upcoming communication on local and regional authorities in development

In the forum’s final session, the representative of the European commissioner for development and cooperation, Kristian Schmidt assured that the European Commission “takes the role of local government very seriously.” He told participants that a communication on the empowerment of local public authorities is currently being drafted by the Commission and should come out before the summer of 2013.

Following a request made by Lupe Moreno from the external relations secretariat of the Generalitat de Catalunya, Schmidt declared that he would ensure the communication is broadened to include intermediary and regional authorities as well as local authorities.