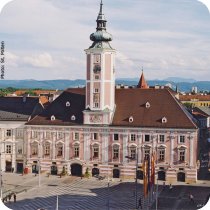 Welcoming the draft cohesion regulations, regions, cities and their representative organisations agreed that there is still a lot to do to ensure that the full impact of cohesion policy is felt on the ground. They emphasised the importance of maintaining an adequate level of funding, a strong integrated approach to territorial development, and stressed the importance of partnerships directly involving local and regional authorities in the decision-making process.

This came in response to the publication of the legislative proposals for the future cohesion policy by the European Commission and to the current budget proposals, following a summit of European territories held on 21 October in St. Pölten - Niederösterreich (A). Speaking for the first time ever with one voice, they adopted the 'St. Pölten Manifesto", a declaration urging the Council of the EU and the European Parliament to support regional and local interests in cohesion policy.
What they said:

"A very impressive symbol has been set with the unique EU lobbying initiative initiated by Lower Austria for the objective 2 regions in October 2010. The declaration signed by 143 regions with the demand that all regions in Europe, independent of their economic power, should benefit from structural funds after 2014 has made impact. Following this, a common manifesto of 11 interregional organisations with central demands for Cohesion Policy has been signed in St Pölten on 21st October 2011 and handed over to the competent EU Commissioner Hahn as well as to the representative of the EU Council presidency Bienkowska. In the centre of it is the positive development of regions as these are the motor of the European Union". Governor Erwin Pröll, region Lower Austria.
'The budget proposed by the European Commission for the future Cohesion Policy must absolutely be maintained and the economic and social achievements of cohesion policy should not be damaged! Moreover, AER believes that the best way to obtain the best results with the structural funds is to integrate them into coherent strategies for territorial development, and this can only be achieved through a closer partnership with the regions". Michèle Sabban, President of the Assembly of European Regions.
'The territorial cohesion objective can only be achieved with a substantially increased involvement of local and regional authorities at all stages. This must include direct involvement through their political leadership. As the level of political representation closest to the citizens, city leaders know best how to manage and coordinate actions to deliver results". Paul Bevan, EUROCITIES Secretary General.
'Local development strategies must be recognised as a key priority in the operational programmes so that urban, rural and functional areas all receive equal support, ensuring that no territories are left behind. Besides, involving all spheres of governments in the partnership contracts will ensure a successful preparation, implementation and evaluation of these programmes". Carola Gunnarsson, Council of European Municipalities and Regions' rapporteur on cohesion and territorial policy.
'Subsidiarity has also its place in the debate on cohesion policy. The heightening of the awareness of all the levels of power - from the citizen to the European institutions through the Member States - is a prerequisite to make Europe a space where the citizen is respected and to make the European project one realized for and by the citizens". Jean-Luc Vanraes, President of the Conference of European Regions with Legislative Power.
'The importance of interregional cooperation in all existing forms is uncontested. The rapidity of the creation of macro-regional strategies demonstrates an innovative and necessary EU activity field of territorial cooperation, which is further expandable in the future and which brings additional opportunities and values for the whole of Europe". Willi Haag, President of the Working Community of Alpine regions.
'The European Territorial Co-operation objective is one of the most efficient policies in order to reach citizens' expectations in terms of social and territorial cohesion, sustainable development and economic growth. The CTP that gathered Regions from the two sides of Pyrenees, requests from the EU an increasing financial support to cross-border cooperation programmes in order to ensure the Europe 2020 Strategy's successful implementation in cross border areas". Martin Malvy, President of the Working Community of the Pyrenees.
'Now that the European Union is facing various challenges, it is of utmost urgency to strengthen the confidence of all European citizens in the Institutions. A cohesion policy, provided it is efficiently funded and the initiatives are coherent and sustainable, can be an important tool in fulfilling this task. Because only at the local and regional level European identity can be experienced by all citizens". Wolfgang Platzer, Secretary General of the Working Community of Adriatic Alps.
'We send a clear message to the EU and Member States: we want to take part in all debates affecting future Cohesion. Multi-level and transparent governance is the best framework to discuss some thorny issues, such as conditionality. We are closer to the citizens, so we should be listened and taken into account when discussing main decisions affecting us in the coming years". Gabriele Lackner-Strauss, Vice-president of the Association of European Border Regions.
'We should avoid transforming the European budget the adjustment variable of national budgets! In addition to not being legitimate, it would have severe consequences for Europe, its territories, businesses and citizens. We oppose any form of macro-economic conditionality: it opposes the programming dimension of cohesion policy and adversely affects the re-establishment of satisfactory macro-economic stability in Member States and regions concerned". Jean-Yves Le Drian, President of the Conference of Peripheral and Maritime Regions of Europe.
'The Working Community of the Danube area - an association of 42 regions along the 2880 km of Danube - has worked together extensively on the development of the strategy of the European Union for the region of Danube and brought their plans and ideas. The 1st of July 2011 marks the beginning of the implementation phase. However, the strategy can only be successfully realized if the regions continue to receive funding for their projects. This initiative represents an important step in the implementation of enhanced cooperation in the region of Danube. For this reason, starting in 2012 the Niederösterreich will assure the presidency of the Working Community of the Countries of Danube at the level of its President, Mr. Erwin Pröll, in order to deepen this cooperation". Peter De Martin, Secretary General of the Working Community of the Danube area.