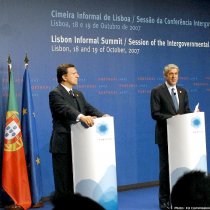 The Lisbon Treaty: "a progress for municipalities, regions and Europe"

The Council of European Municipalities and Regions (CEMR) welcomes the Lisbon Treaty as agreed by Europe's heads of states and government in the early hours of 19 October 2007.

Europe's municipalities and regions first and foremost are pleased that an institutional agreement was reached in Lisbon, says CEMR president and mayor and governor of Vienna Michael Häupl. Europe's local and regional government is not interested in semantics, in arguing over whether this treaty amends or replaces previous ones; we view the agreement in Lisbon as positive since it will now enable the European Union to move on to dealing with issues that matter to most Europeans: climate change, public services, the economy...

Furthermore, the Lisbon Treaty preserves all of the key points in the Constitutional Treaty which strengthened the role of the local and regional levels, adds CEMR president. Some three quarters of the EU legislation is implemented by Europe's municipalities; we can therefore only welcome the fact that the new protocol on public services (or services of general interest) underlines the need for the EU to respect the wide discretion of local and regional authorities in the providing, commissioning and organising of our public services. The definition of subsidiarity is extended to include the local and regional levels, which means that the EU should not act where action at local or regional level is appropriate, and the Committee of the Regions of the EU will have the power to go to the Court of Justice if it believes the subsidiarity principle has been breached.

Other key points specifically for local and regional government that are included in the new Treaty are:

The new treaty will now have to be ratified in all 27 member states ahead of the European elections in June 2009.
Translate