Equality of women and men in local life 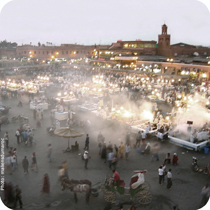 Marrakech's first woman was elected mayor by its city council

For the first time in Morocco's history, a women is elected mayor of Marrakech, one of Morocco’s biggest cities and home to 1 million inhabitants.

Fatima Zohra El Mansouri outpolled outgoing mayor Omar Jazouli by 54.votes to 35 in the municipal council vote. She becomes the second woman to take a mayoral position in Morocco after Asmaa Chaâbi, mayor of Essaouira.

It is also the first time that the government stipulated a 12 percent quota for women in municipal polls.

Fatima Zohra El Mansouri was born in 1976. She studied law in France and is a daughter of a former assistant ...

After Paris, Vienna and Athens, Brussels signs up to the Charter for gender equality

Some principles for achieving gender-based equality within public administration and ...

Pisa Conference "Acting Locally for Equality": opening of registrations until 8 ...